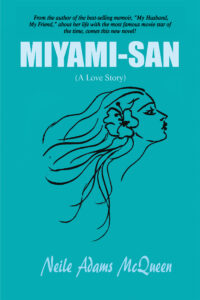 Los Angeles, CA (February 8, 2022) – From the author of the best-selling memoir, “My Husband, My Friend,” about her life with the most famous movie star of the time, comes this new novel….

MIYAMI-SAN (A Love Story) (pronounced “me-ah-me sahn”), a new book written Neile Adams McQueen (pronounced “Neel”), available now on www.amazon.com, www.barnesandnoble.com and www.authorhouse.com.  MIYAMI-SAN is a story of love in all forms and how life is not about the storm – but learning how to dance in the rain.

MIYAMI-SAN (A Love Story) is set in Manila, The Philippine Islands, in 1930.  When the innocent and extraordinarily beautiful Mila Alvarez takes the stage at the Olympic Stadium one fateful night as the newly named MIAMI, she has no idea of the journey that lies before her.  She transforms from a young, sheltered schoolgirl into an intuitively inventive and bold new star and soon finds fame and adoration throughout Southeast Asia and beyond.  Along the way comes handsome Lt. John Holbrook who wreaks havoc on her young life as World War II looms ever closer.  When she crosses paths with Japanese industrialist Koda Sato her life changes its trajectory.

Neile Adams McQueen says, “The characters in MIYAMI-SAN (A Love Story) had been milling about in my mind for a long time, and were, in part, influenced by people and circumstances I’ve encountered in my own life.  Then when the COVID 19 pandemic began in December of 2019, I came to the conclusion that it was time to write this book and commit the story to the page.  And so I did.”

The novel is available in:

Pricing for MIYAMI-SAN (A Love Story) is as follows:

More About The Author, Neile Adams McQueen
Neile Adams McQueen began her career as one of Broadway’s foremost Jazz dancers and performers.  She has also appeared in movies and on television shows in a career spanning eight decades.

Born in the Philippines on July 10, 1932 of Eurasian descent, Neile Adams McQueen is 57% Basque (Spanish), 10% English and Irish, 26% Asian (Chinese, Japanese and Mongolian) and 7% Polynesian.  She spent the Second World War in Japanese-occupied Manila, emigrating to America with her mother in 1948.

She graduated high school from Choate Rosemary Hall in Greenwich, CT.  Marjorie Webster Junior College in Washington D.C. followed, and as soon as she was able, she moved to New York and was given a scholarship to the Katherine Dunham School of Dance.

A year later she was part of the opening act of the Lena Horne Show at the Cocoanut Grove in Los Angeles, CA.  Shortly thereafter the 21-year-old was selected by choreographer Jack Cole to become a featured dancer and a Princess of Ababu, in the original Broadway production of “Kismet.”  Her appearance in New York’s Versailles Club prompted director George Abbott and legendary choreographer Bob Fosse to immediately cast her as the dancing lead, Gladys Hotchkiss, in the Broadway musical, “The Pajama Game.”  There she first saw her name in lights on Broadway.

She danced her way into the hearts of producer Joe Pasternak and director Robert Wise where a seven-year contract at MGM awaited her.  Her first feature film was “This Could Be The Night” and she became the studio’s hottest young starlet.

During this period, Neile Adams met and married young actor Steve McQueen after only four months of dating.  When Steve’s star rose, they wound up on the cover of LIFE magazine and became Hollywood’s newest “power couple.” They were married over 15 and half years and had two children together:  a daughter, Terry Leslie McQueen (1959–1998), and a son, Chadwick Steven McQueen, born in 1960.  The union produced four grandchildren:  Molly, Steven R., Chase and Madison McQueen.

Neile Adams later married Alvin Toffel, then president of the Norton Simon Museum.  They remained married until Toffel’s death in 2005.

As a performer, Neile Adams guest starred in over 20 television shows such as “The Bob Hope Christmas Special” (twice), “The Pat Boone Show,” “The Eddie Fischer Show,” “The Perry Como Show,” and dramatic shows like “Alfred Hitchcock Presents” (three times), “Fantasy Island,” “The Bionic Woman,” “The Man from U.N.C.L.E.” and“The Rockford Files.”  Film credits include:  “This Could Be The Night,” “Fuzz” and “Chu, Chu and The Philly Flash,”among others.

Neile Adams McQueen is a member of the charitable organization, SHARE (Share Happily And Reap Endlessly) and is a board member of The Boys Republic of Chino Hills, CA.

She performs her Cabaret shows, which are often autobiographical, in Los Angeles, New York, London and Paris.  She has also performed at a Royal Gala at The London Palladium. 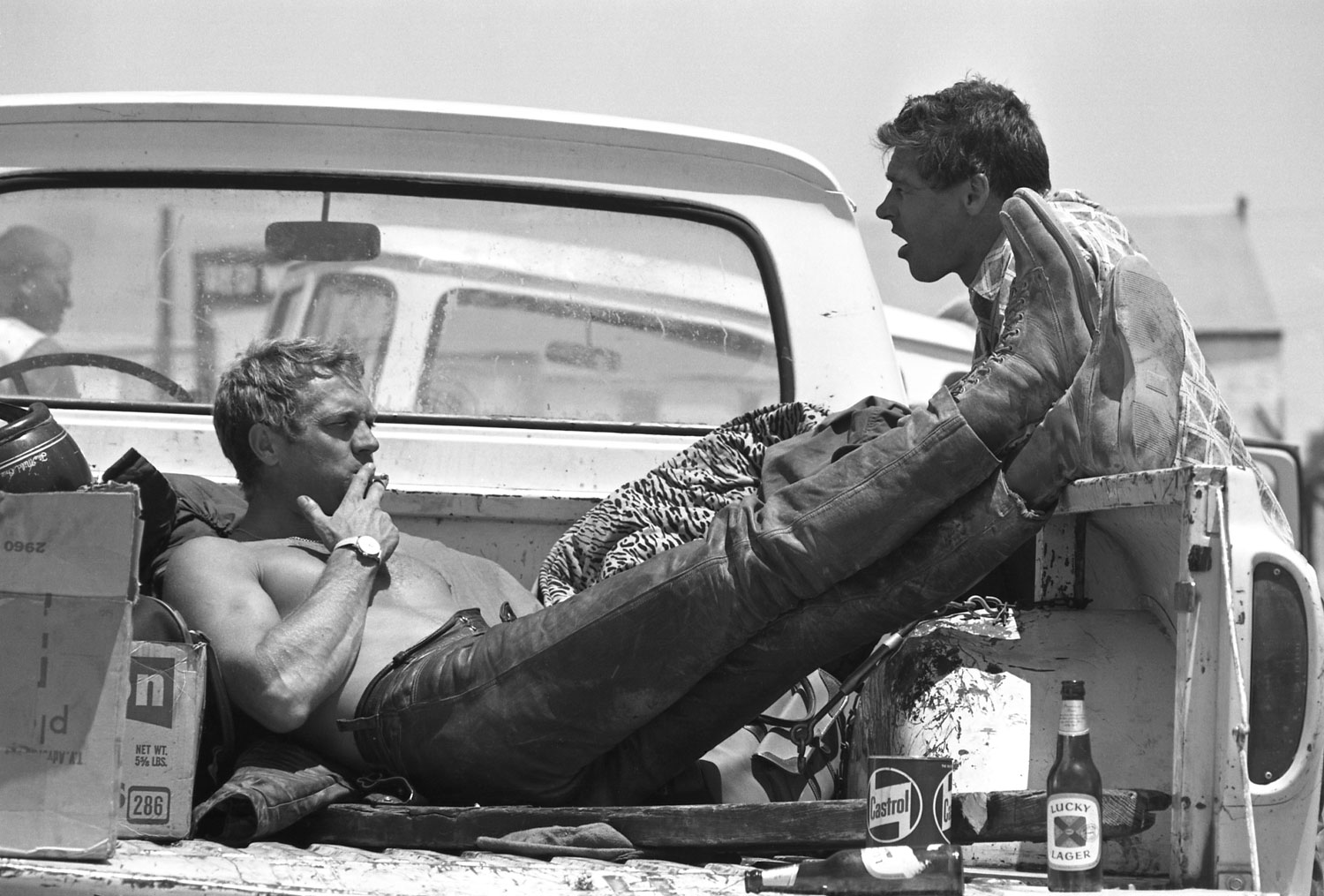 Steve McQueen: Photos of the King of Cool, 1963

Photos of the legendary Steve McQueen riding motorcycles, camping, working out and shooting guns in the desert with his wife in 1963.

In this interview with Seth Meyers, the film director Quentin Tarantino talks about Steve McQueen and the movie, The Getaway, and how Neile Adams was the power behind Steve McQueen.